Until quite recently, radiopharmaceuticals have been confined to a very limited number of application in healthcare. However, in the last few years, medical research teams have started to unlock the huge potential of these compounds, both in the diagnostic and the therapeutic fields. Nuclear medicine, as it is also called, is becoming one of the most powerful tools in precision medicine.

What is a radiopharmaceutical?

Out of a range of radioactive decays, there are three types of radioactive particles that are useful in nuclear medicine. For therapeutic purposes, the beta particle emission is used, and for diagnostic purposes, positron emissionand gamma rays are used. 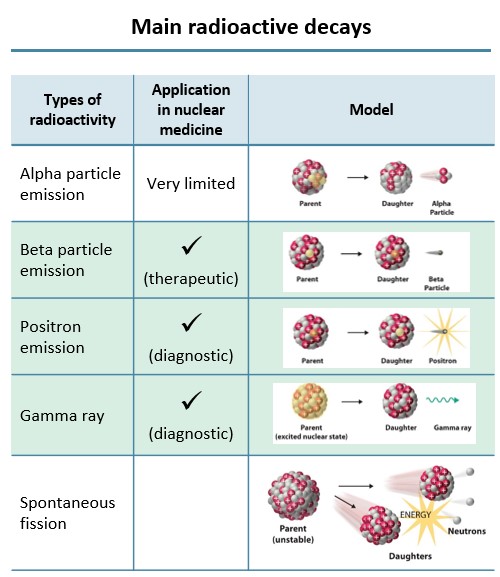 PET scans have a higher precision than other imaging modalities, improving disease diagnosis, staging and monitoring, thus allowing the physician to better plan the course of treatment for patients

For diagnostic purposes, Positron Emission Tomography (PET) scans use radiopharmaceuticals which allow the imaging of organ function and disease states with a higher precision than other imaging modalities such as Computed Tomography (CT), Magnetic Resonance Imaging (MRI) and Ultrasonography (US). Radiopharmaceuticals permit the mapping of physiological function and metabolic activity of malfunctioning organs, as well as, the diagnosis of common cancers. With the precision of PET scans, these results are becoming the standard of care for cancer diagnosis.
For monitoring purposes, there is increasing use of a radiopharmaceutical known as Fluorine-18 (18F) Fludeoxyglucose (FDG). FDG-18 is used in PET scans for both disease staging and treatment response assessment. With newer scanning techniques that have greater sensitivity and specificity, physicians can now conduct pre-treatment staging. These pre-treatment staging results can change therapeutic intent from curative to palliative, and place patients more accurately in the stages of their disease. Furthermore, simple quantitative results of glucose metabolism detected by the PET scan, can complement visual interpretation of the patient’s response to a drug. This can be used to determine whether to continue a treatment or to switch to another one. 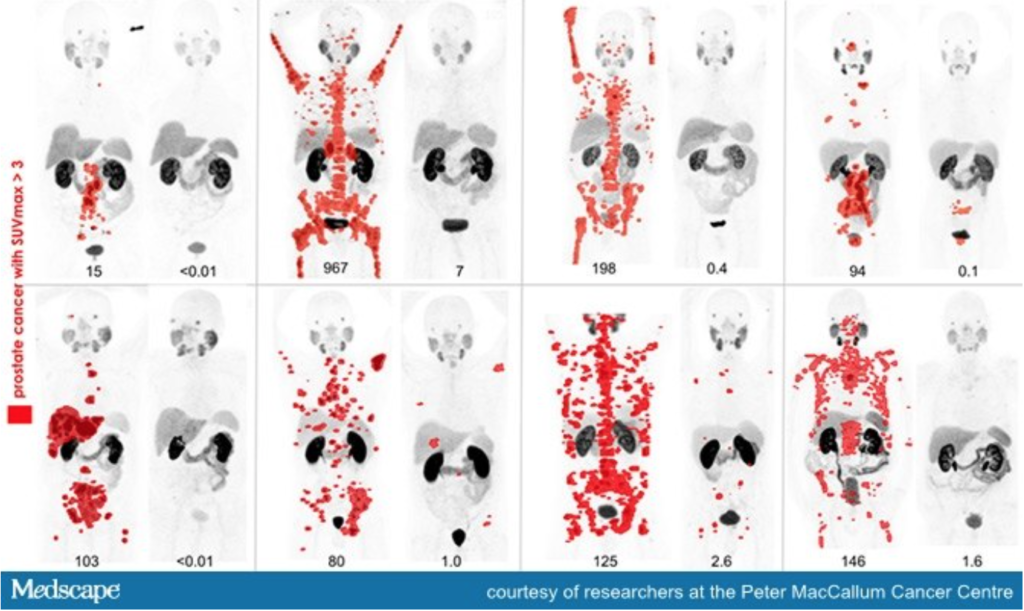 Fig. 2 – Eight men with widespread metastatic prostate cancer (red spots on image mark presence of tumours) who underwent treatment with radiopharmaceuticals. Each set of image shows the evident reduction of tumours before and after treatment.

For therapeutic purposes, radiopharmaceuticals allow precision medicine where the treatment modality is tailored to a specific patient’s disease. For instance, to destroy cancerous cells, short-range particles like beta particle emissions are used to release a significant amount of energy resulting in tumour cell destruction. As damage is targeted, it reduces serious systemic side effects seen with chemotherapy. This property of radiopharmaceuticals can be further applied on pain treatment in palliative care for bone cancer or arthritis.

Radiopharmaceuticals are very useful in determining potential drug candidates which would succeed in Clinical Trials, thus accelerating the process of drug approval

Although only a small portion of the radiopharmaceutical market, research is starting to embrace the abilities of PET scans too. Radiopharmaceuticals are increasingly used to improve efficiency and reduce the lead time of drug development. By using radio-imaging in Phase 0 (early phase) of a clinical trial, it gives a visualization of in vivo bio-distribution of the new drug in patients, thus realizing if the new drug hits required target organs. Without the need of invasive sampling, trials can easily identify and eliminate unlikely drug candidates and only proceed to the next phase with promising ones.

With essential pharmacology data collected with radiopharmaceuticals in Phase 0, Phase I and II clinical trials could be combined into a Phase I/II trial. Successful patients in Phase 0 could be once again recruited, reducing number of new patients recruited and time needed for tests. Most impactfully, with a very well-selected group of patients in Phase I/II, the new drug would probably yield a highly positive result in this specific population. The new drug could then be put through an Expedited Approval (in US), thus skipping a full Phase III trial.

Several months after the FDA, the EMA has now approved Kymriah and Yescarta from Novartis and Kite/Gilead. There is no doubt that, from a medical perspective, these therapies are a revolution in cancer treatment. However, at such a cost per patient, what is their future on the European market?

Oncology represents more than 50% of the current R&D pipeline in cell and gene therapies with about 500 ongoing trials worldwide in 2017. By using genetic redirection of patient’s own immune system to kill its tumour cells, CAR-Ts appear as a revolutionary technology in cancer treatment.

CAR-Ts have been first developed for treating haematological malignancies, where tumour cells are easily accessible (compared to solid tumours). Clinical proof-of-concept with autologous CAR-T has been done on CD19 wearing tumour cancers. Autologous treatments are the most advanced: they are built from the patient’s own cells, contrary to allogeneic therapies that are built as off-the-shelf treatments from a unique healthy donor. Several autologous productsare expected to reach the market soon. Allogeneic therapies still need to get their proof-of-concept done but will offer a much more cost-effective solution.

Since the approval of Novartis’ Kymriah and Kite’s Yescarta by the FDA in 2017 for the treatment of haematological malignancies, both companies have started to work out with the US Government possible ways to address the issues of payment of these treatments and creation of a suitable logistic chain for manufacturing and supplying these products.

Kymriah and Yescarta have received their European marketing authorization in August 2018. Several other CAR-T products will follow, developed, among others, by Celgene (that recently acquired Juno Therapeutics, and owns licence for BlueBird Bio products), Ziopharm, Celyad, and Janssen (that owns licence for commercialization of the Legend Biotech product in the US and Europe, the first CAR-T that have been under regulatory review in Asia). To ensure these revolutionary treatments are available to patients needing them, Europe must answer several strategic questions:

Logistics is critical for autologous CAR-T therapies because the patient is part of the manufacturing chain. Time between collection of T-cells and administration of CAR-T cells is critical and must be reduced as possible. Indeed, patients eligible to these CAR-T treatments have a short life expectancy (relapsed/refractory ALL or NHL for currently approved Kymriah and Yescarta). Their production and distribution require a complex organization between several players. Players include hospital teams(collection and administration), vector (mostly virus) providers and CAR-T manufacturers(transduction of T-cells).

In the US, Kite and Novartis developed the same model for delivering their treatments: a multicentric collection and administration of products in a limited number of certified centers and transduction in a unique manufacturing site located in the US (Morris Plain for Novartis, and El Segundo for Kite Pharma) with virus produced externally. This model was developed for clinical stage production and need to be optimized for supplying a growing demand. 2 solutions are currently under investigation: either a Point-of-Care approach with a bedside production of CAR-Ts in dedicated centers or automation and optimization of the chain in a centralized plant.

With the current model, and for delivering their treatments in Europe, the two companies must adapt their logistic chain: manufacturing CAR-Ts on a different continent would be unsustainable at commercial scale considering costs and time constraints. A European manufacturing site would be sufficient to supply all European countries: an in-house plant or a CMO could do the job. Kitehas made the choice to build a plant near Amsterdam airport (the Netherland) to supply the European market, and Novartis announced the enlargement of its European plant in Stein to product CAR-Ts, in addition to an agreement with the French CMO CellForCure.

CellForCure has already played a role as a CMO in the CAR-T field with the manufacturing of Cellectis allogeneic CAR-T cells for their trials (in addition to the Italian CMO MolMed). The role of such European CMOs will further increase with the growing demand for CAR-Ts. Expertise in autologous and allogeneic ex vivogene therapy is already present in Europe. For instance, PharmaCellalready have experience with autologous and allogeneic ex vivogene therapy manufacturing for Orchard Therapeutics and Lion Biotech. Several promising CMOs are re-orienting to propose CAR-T lines and some CMOs have already bet on allogeneic CAR-Ts, the future step of CAR-Ts, such as MaSTherCell which signed agreements with Servier and CRISPR Therapeutics for production of their allogeneic CAR-Ts in development.

In addition to transduction and cell production expertise, virus suppliers emerge as key players due to a worldwide high demand and shortage in virus supply. Virus production does not require to be perfomed locally because virus can be frozen and shipped everywhere in the world. Novartis has for instance used virus produced by Oxford Biomedica(UK) for its US product. Here again, numerous European CMOs have developed expertise in virus manufacturing, such as YposKesi, MolMed, FinVector and Novasepand offer an alternative source of virus for CAR-T manufacturing.

Commercial scale production remains the first challenge for CAR-T supply, however CAR-Ts also require to be delivered in a highly controlled environment.

In the US, Novartis and Kite had selected a limited number of centers for delivering their treatments. They wanted to insure these centers were trained to manage side effects of CAR-Ts, that may be fatal for the patient (Cytokine Release Syndrome and Neurological Toxicities). In addition, because CAR-T are innovative life-time modifying treatments, rigorous collection of patient’s data must be performed for post-authorisation follow-up. This argument is also in favour of precisely selecting delivery centers.

One criterium in the US was the obtention of FACT accreditation (Foundation for the Accreditation of Cellular Therapy). By applying this selection process to Europe, the equivalent FACT-JACIE(Joint Accreditation Committee of ISCT-Europe and EBMT) accreditation appears as a first criterium of choice for hospital centers. The EMA CAR-T cells registries workshop organized in February 2018 between clinical, regulatory and development experts highlighted this as a fact of importance. Considering the selection, the number of hospitals providing autologous CAR-Ts will be restricted to a small proportion of expert centres, to where patients will have to travel to get treated.

Besides high constraints in supply chain and delivery, CAR-Ts are also very expensive (~$400k public price per treatment in the US). Despite their therapeutic effect, it is unlikely that they will be used beyond specific very small population until prices decrease. Even in the US, where a pay-for-performance scheme seems to be adopted, the situation is not clear. There is still some conflict with official classification codes from the CMS (Centers for Medicare & Medicaid Services) that are not reflecting the total costs of the procedure that require ancillary cares and a question of who-is-going-to-pay.

The public prices in Europe are not known yet but cannot be dramatically different from the US prices. It should not be taken for granted, however, that European payors will accept the US prices. The future of CAR-Ts in Europe will strongly depend on what type of deals pharmaceutical companies will be able to negotiate with authorities. There is no doubt that a lot of creativity and long-term thinking will be needed if CAR-Ts are to be used on a significant scale in Europe.

The real change, and potential long-term solution, could be the development of allogeneic CAR-Ts, that should be available at a much lower price. This technology, if it proves effective in clinic, may actually be the real start for CAR-Ts.