The microbiome is an ecosystem of microbes such as bacteria, fungi or viruses living in and on the human body. It plays an essential part in the functioning of our metabolism, our immune system and in our mental health. While the definition of a “healthy” microbiome remains to be defined, microbiome disruption is associated with numerous diseases, offering new therapeutic opportunities if causalities are demonstrated.
Characteristics of the human microbiome

Humans are colonized by trillions of bacteria, viruses, fungi and parasites. The recent decrease in price of DNA sequencing has allowed scientists to generalize their use of that method, and thus explore uncharted territories of our bodies. This emerging field is called metagenomics. Bacteria occupy not just the skin, but also many other parts of our bodies. The Human Microbiome Project, launched in 2008, has identified 48 body sites for microbiome sampling: among these, the top four are feces, the buccal mucosa, the vagina, and the rectum.

While bacteria account for just 1 to 3 percent of the body mass (~1.5 kg for an adult), the total number of genes is 10 to a 100 times the number of human genes, thus increasing the complexity of their analysis. Resulting from a long co-evolution, most of these microbes live in symbiosis and some of them are even essential to maintain our bodies healthy, such as those producing vitamin B12. The exact role of most of these organisms is nonetheless yet to be understood.

The microbiome is specific to both the regions of our bodies and to the different kinds of bodies themselves. As highlighted in Figure 1, the prevalence of bacteria is largely dependent on the region of interest. Moreover, there is no current definition of an “healthy” microbiome, as the distribution of bacteria across healthy individuals fluctuates largely. While it is increasingly admitted that a diversified microbiome is often correlated with a healthy body, growing number of articles on the subject also emphasize that changes in the composition of microbiomes correlates with numerous diseases. 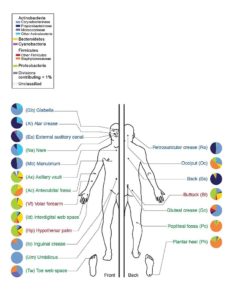 Among the ~2,100 microbiome clinical trials listed on the clinicaltrials.gov global database from 2000 to 2017, 35% of the studies are conducted in Europe, followed by 33% in the USA. China is third and far behind with only 5% of the overall number of studies. Nonetheless, the number of Chinese clinical studies is thought to be underestimated to be underestimated. Indeed, after merging the previous database with theChinese Clinical Trials Registry, the number of Chinese microbiome clinical studies is twice higher representing about 10% of the overall microbiome studies.

Europe was responsible for the initiative of the first trial mentioning microbiome in 2000, while the USA tackled the subject in 2006 and China in 2009. Moreover, Europe represents 32% of the publications on the microbiome listed on PubMed from 2006 to 2017, versus 23% for the USA and 9% for China. The USA is now taking the lead in number of microbiome trials. The number of trials in the USA is growing at +25% p.a. since 2014, compared to +17% p.a. in Europe. This gap is expected to further widen in the coming years. China is around 4-5 years behind Europe and the USA, yet the number of studies is growing at a fast pace (+39% p.a.).

Therapeutic applications and areas of interests

Historically, microbiome therapeutic areas of interest have been gastrointestinal diseases (irritable bowel syndrome, inflammatory bowel disease, and Crohn’s disease) and metabolic diseases (obesity and diabetes). They respectively represent 20% and 15% of the overall number of microbiome trials performed in Europe and the USA.

In recent years, the potential applications for microbiome have extended to other therapeutic areas. Based on the number of clinical trials, the therapeutics areas that progress the fastest are central nervous system diseases, infectious diseases, and oncology. The number of clinical trials in oncology, including a microbiome analysis, is growing at a fast pace in Europe with +41% p.a. since 2011, but it is still behind the USA in volume. Indeed, microbiome trials in oncology already represent 7% of the overall number of trials conducted since 2000 in the USA while it represents just 2% in Europe.

First therapeutic treatments are already emerging, such as the fecal microbiota transplantation (FMT). The intervention consists of introducing the microbiota from a healthy donor into a patient. The FMT could be used to treat Clostridium difficileinfections (CDI) but it could also be applied to fight gut dysbiosis following heavy treatments like chemotherapy. For instance, Maat Pharma, OpenBiome, or Rebiotix are biotechs developing FMT solutions. It requires the access to a biobank with characterized feces from healthy donors. However, the legislation around FMT is still to be defined. In the USA, it is classified as a biologic product and a drug only for CDI affections. In Canada, it is registered as a new biologic drug and its use is restricted to clinical trial. There is no regulation at the European level but countries are setting their own rules instead. In France, it is considered to be a drug and aside from exceptional circumstances, FMT should only be administrated under a clinical trial. However, in the UK, the National Institute for Health and Care Excellence (NICE) allows the use of FMT in the NHS for patients with recurrent CDI who are not responding to traditional therapies.

The interest of the Food industry in the microbiome relies mostly on the development of probiotics and prebiotics. Probiotics are live bacteria positively acting for health, while prebiotics are molecules that selectively favor some commensal bacteria, enhancing their growth. Moreover, clinical trials investigate the role of different diets like Mediterranean diets, vegan diets, or gluten free diets on microbiome. However, since the reinforcement of the European Food Safety Authority (EFSA) regulation on health claims in 2012, the number of food clinical studies is stagnating. Yet some Food companies such as PiLeJe are developing their products as a drug and therefore follow the same path as Pharma companies with clinical studies to prove the efficiency of their products.

Thanks to metagenomics development, the understanding of the human microbiome has opened the door for multiple applications. They are already spreading from nutrition to diverse therapeutic areas such as gastrointestinal and metabolic diseases, infections, neurologic diseases and oncology.
While associations have been found between microbiome dysbiosis and pathologies, causality and mechanisms still represent an important scientific challenge. Our study shows that Europe is at the forefront of the human microbiome research, as it promotes the emergence of new biotech companies developing microbiome-based products.